We have written about the value to commercial property owners about having in place an annual roof maintenance program.  Quite simply, the investment to keep a commercial roof in good shape far outweighs the costs involved in replacing the roof.

Here is a good example:

One of our regular customers finished their fourth year of annual maintenance with us and we did an inspection of the roof which was 18 years old.

The roof is tar and gravel that, when it eventually has to be re-done, will cost over $32,000.00 to replace. That is a lot of money to put out in one gulp.

However, over the last 4 years, the building owner has spent about $600 to $800 per year to keep the roof in good shape and extend its life.  Our recent inspection showed that the roof is in great shape. There was no debris found on it, the flashings looked new as all the rust had been removed and they had been coated with a protector; the caulking of all the flashings was fresh and solid, and all previous worn out spots had been re-done with the gravel put back on.

In short, it looked like a new roof with all the drains clear and ready for anything the Vancouver weather can throw at it.

Here is a not so good example:

We recently inspected a roof that our company had done 5 years earlier.  But the owner had declined regular maintenance at the time.

During the inspection, we found there was 8” of water on a third of the roof, garbage and debris was scattered in all over the place, and a lid from a soda pop cup was blocking the drain. We discovered that the sloped roofs above the flat roof had a dozen shingles blown off and the rest were falling apart. Also, a downspout was missing and water was splashing against the building.

Ouch!  Even though this roof was only five years old, it wasn't in as good a shape as the previously mentioned 18 year old roof.

Unfortunately, it still needed regular maintenance even though it was relatively new.  Debris which has a tendency to collect and obstruct the drains needs to be removed on a regular basis. The sloped roofs should have been taken care of.  They were now 15 years old.  The caulking around the building wall needed to be renewed.  These things weren't evident five years ago.

So a commerical roof maintenance program is really a necessity, not a luxury.

If you are a commercial property owner and would like a quote on a maintenance program for your roof, just fill out our online form or give our office a call at (604) 263-0334. 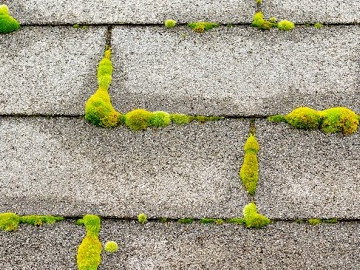